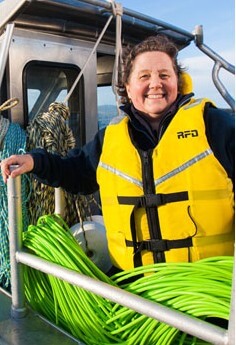 Tasmanian salmon Industry Community Engagement Officer Fiona Ewing, state winner of the 2012 Rural Industries R&D Corporation (RIRDC) Rural Women’s Award will travel to Canberra in early October for the announcement of the national Award.
Fiona is one of seven finalists in the national 2012 RIRDC Rural Women’s Award which will be announced in front of 300 industry leaders, politicians and special guests at the national Award dinner at Parliament House on Tuesday 9 October.
The Award identifies and rewards women’s contribution to primary industries and rural communities by providing financial assistance, mentoring, resources and support via its nation-wide network of business and community leaders for selected state winners.
Fiona has 20 years’ experience in the Tasmanian seafood industry, as a scientific observer working on commercial fishing vessels in Tasmania, a Fisheries Extension Officer with Ocean Watch Australia and currently as Community Engagement Officer with salmon growers, Tassal.
Fiona says the RIRDC Award has provided her the opportunity to develop her leadership skills and progress an initiative that will directly impact and benefit her two passions – local communities and the seafood industry.
Fiona received a $10,000 bursary as part of the Award and travelled to Scotland in May to research community engagement strategies and to visit a salmon farming company that has established a community trust, which provides financial support for community projects that deliver lasting change.
“My goal is to create a similar model in Strahan to ensure a vibrant, sustainable community,” said Fiona. Since returning from Scotland, Fiona, along with Robyn Gerrity, West Coast Councillor, has established a steering committee of Strahan-based women who will act as an interim steering committee for the project.

“We are aiming to gain support from other companies and launch a community trust on the west coast of Tasmania within 12 months,” said Fiona.
Fiona and other state winners will spend a week in Canberra participating in the Australian Institute of Company Directors (AICD) course prior to the national winner announcement.
RIRDC Managing Director, Craig Burns said women such as Fiona are the social fabric of the rural and regional community within Australia.

“Fiona is a great example of what this Award is all about – acknowledging the unique leadership traits of women to connect, collaborate and to influence and effect change in their industries and communities.
“We look forward to celebrating Fiona’s achievements at the national Award dinner in October and watching her develop as a leader in primary industries,” said Mr Burns.

The 2013 Rural Industries Research and Development Corporation (RIRDC) Rural Women’s Award is now open to applications. Rural women are encouraged to enter themselves or to nominate someone with a commitment and desire to making a real difference to their industry and community. Applications close on 15 October 2012.