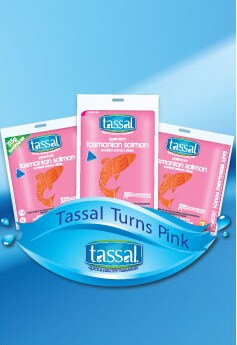 Pink – The New Blue!
From Mother’s Day (8 May) every pack of Tassal smoked salmon will come in pink packaging in support of the National Breast Cancer Foundation (NBCF).

We are supporting the NBCF with a donation of $75,000, which will help fund vital breast cancer research projects around Australia.

“The many women in Australia who cope with breast cancer have inspired us to contribute to this worthy cause,” said CEO Mark Ryan.

“This campaign is close to many of our hearts. Everyone at Tassal is very excited to be involved.

“Promotion of good health underpins what Tassal stands for as a company, and we are grateful to be able to support a cause significant to the women who support our product.”

The NBCF is Australia’s leading community-funded organization which funds research into the prevention and cure of breast cancer.

Since it was established in 1994, more than $74 million has been awarded to Australian-based researchers across every state and territory to improve the health and wellbeing of those affected by breast cancer.