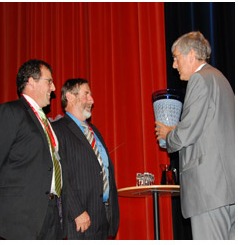 Tasmanian Invention Wins International Innovation Award
A fish farm net cleaner developed in Tasmania by Tassal and its employees has won a prestigious innovation award at an international aquaculture conference in Stavanger in Norway.

The marine inspector and cleaner (MIC) was announced as the winner of the Aquavision 2010 innovation award in front of 500 aquaculture industry delegates from 35 countries. The award includes a prize of €10,000.

The MIC has the potential to revolutionise the way companies around the world manage the cyclical problem of net cleaning – a fact confirmed by the award jury who look for “
breakthroughs in the area of aquaculture.”

The award criteria calls for entries of innovation that “
break with conventional processes and go beyond marginal improvements in existing products and services.”

Manufactured by Tasmanian company MIC Pty Ltd, a joint venture between Tassal and Seafarm Systems, the MIC features a hydraulically powered cleaning head that crawls over the sides and base of any size net, vacuuming off fouling (weeds) in a single pass and disposing of it well away from the net.

Due to the speed and ease of operation, nets can be cleaned on a regular basis, resulting in minimal fouling growth.

Tassal managing director and chief executive officer Mark Ryan said the most compelling benefit of the cleaning system was fish growth and health.

“The innovation is assisting Tassal to move away from the need to use anti-fouling paint on our fish farm nets.

“MIC is an example of how Tassal is building sustainability into our day-to-day operations. Moving away from anti fouled nets to in-situ net washing is a critical step in our work to be truly sustainability.”

Seafarm Systems director James Cretan said he was pleased to be partnering with Tassal in the MIC joint-venture.

“Tassal and Seafarm Systems are of the same mind when it comes to sustainability and the need for the sustainable practices,” he said.

Mr Cretan said there were many benefits associated with the MIC system.

“For example, where it once took four divers using high pressure cleaning equipment eight hours to clean the base and sides of a 120-metre circumference net with 10-metre sidewall, using MIC it takes one person about three hours to clean the same net.”

International patents on the unique technology used by MIC are pending.

Click here to learn more about the MIC and how it operates.