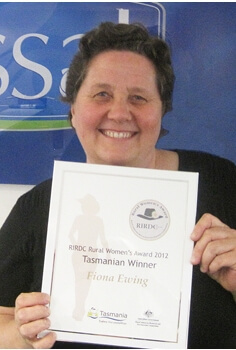 The $10,000 State award will allow Ms Ewing to travel Scotland to learn more about the salmon industry. It will also provide the opportunity to attend an Australian Institute of Company Director’s course in Canberra.

“The Tasmanian Government recognises the vital contribution women make to rural industries and communities, and is proud to support the RIRDC Rural Women’s Award in partnership with RIRDC, Westpac and the other major sponsors.

“It is Australia’s pre-eminent award supporting the development of skills and capacity in rural women, and fosters women as leaders in primary industries.”

This year’s runner up was Gina Butler of Tunnel, who was recognised for her work in goat dairy industry in Tasmania.

In third place was rural veterinarian Sue Martin, who received the Tasmanian Women in Agriculture Encouragement Award, a $1,000 training bursary.