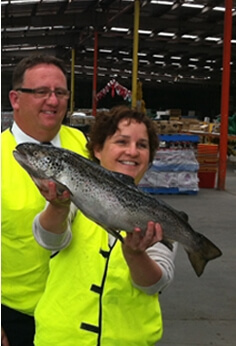 The fish, sourced from Tassal’s Russell Falls hatchery, will be processed and packaged by Mures at its Glenorchy plant in time for distribution by welfare and community agencies for Christmas.

Tassal chief sustainability officer Linda Sams said the company’s donation of salmon was just one small part of a larger collective effort by many producers, retailers and manufacturers to provide healthy and nutritious meals to Tasmanian families in need.

“Tassal is just pleased that we are in a position to be able to provide this kind of support, particularly at this time of year,” she said.

Ms Sams said Tassal was always keen to support the communities in which it operates.

“While our operations are focused in the Huon Valley and on the west coast, in this instance we are supporting the broader Tasmanian community,” she said.

“Foodbank Tasmania provides food to low-income or single parent families, singles, children and the elderly via local charities,” he said.

Foodbank Tasmania is a member of a national group of affiliated Foodbanks that provides food assistance in every Australian state.