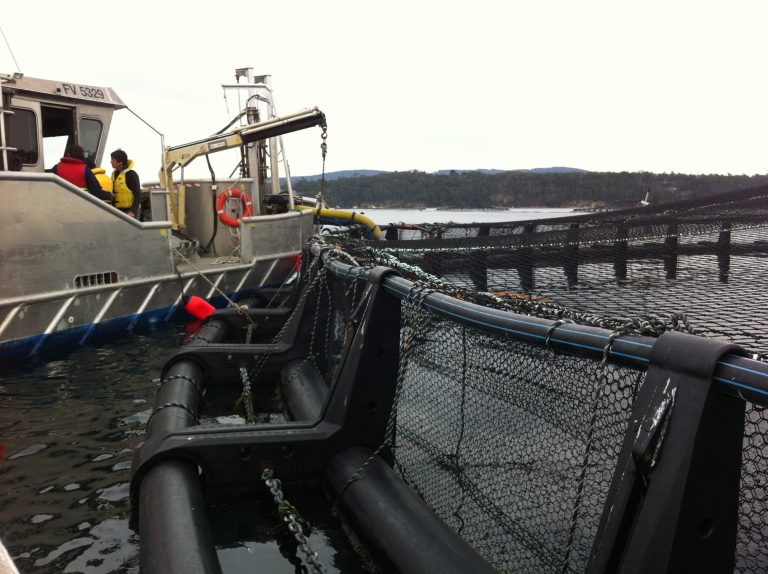 Tasmanian salmon producer Tassal has removed the last of its copper treated nets from the water.

The 2013 Sustainability Report, released today (23 June 2014), stated: “As at 30 June 2013, only seven anti-fouled nets are left in the water, representing less than four per cent of Tassal nets in the water.”

Ms Sams said the last of these nets had now been removed.

“Tassal has invested $10 million in Kikko nets, a semi-rigid net system made from polyester monofilament that protects both wildlife and salmon by making it difficult for diving birds and seals to enter the salmon pens,” she said.

“These nets are easy to clean by in-situ net cleaners.

“A further 80 Kikko nets are currently installed at our farms in the Huon, Dover and Tasman regions.”

Ms Sams said the 2013 Sustainability Report reported on all of the company’s operations, including a snapshot of future sustainability initiatives.

“This year we have increased the scope of the report by adding in our land-based operations with a focus on processing,” she said.

“This final addition means we are now reporting on our entire business operations.

“Tassal is committed to transparency and, through the three Sustainability Reports the company has produced to date, it has “opened the door” to all of its operations.

“This information exchange is critical for meaningful engagement with our local communities and other stakeholders.

“Engagement is not merely a plan – it is a culture within a company.

“Our way forward is to implement mechanisms that encourage stakeholder communication, both internal and external to our operations.

“By focusing on this, we are working towards improving stakeholder access to information about our operations and becoming an even more trusted operation.”

Mark Ryan, managing director and chief executive officer of Tassal said: “This proves again that profitability and sustainable operations are not mutually exclusive.”

The Sustainability Report 2013 communicates the company’s achievements and challenges across a range of topics including the natural environment, health and welfare of Tassal salmon, Tassal people and community engagement.

Tassal is an ASX-listed public company that employs more than 850 people.