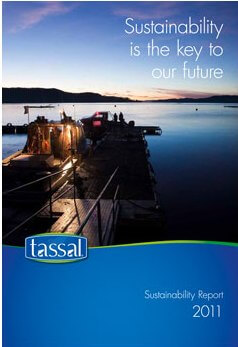 Friday 9th March 2012
Tasmanian salmon producer Tassal has unveiled its first Sustainability Report.
Tassal Managing Director and Chief Executive Officer Mark Ryan said the report published the company’s sustainability achievements to date, together with a snapshot of future sustainability initiatives across all operations.
“In preparing our sustainability strategies, Tassal spent considerable time interacting with stakeholders to identify what was important to them,” he said.
“This level of engagement and transparency is relatively new for Tassal.
“But we believe it is an essential part of our business operations going forward as it will help us to continue to be an accountable and sustainable aquaculture company.”
Tassal’s sustainability report communicates its achievement over the past two years, including reductions in copper antifoulants and reductions in fishmeal use.
Mr Ryan said there was no question that retailers were increasingly keen to sell sustainable seafood products.
“And consumers are more informed today than ever about what they are buying,” he said.
“Aquaculture is widely acknowledged as the fastest growing food producing sector in the world.
“Tassal understands that it needs to set the standard for sustainable aquaculture, thus providing a sustainable food solution to support the global food needs of an ever-growing population.”
At the launch, Tassal also announced it had signed a partnership with WWF to help the company achieve new standards in sustainable aquaculture production.
Mr Ryan said the partnership with WWF-Australia – a high-profile and well-regarded organisation – was a significant and important announcement for Tassal and the aquaculture sector.
WWF-Australia Director of Conservation Dr Gilly Llewellyn said the organisation looked forward to working with Tassal on its sustainability journey.
“Tassal is a significant player in the Australian aquaculture sector, so it makes sense for WWF to work with them towards achieving the highest standards of ecologically sustainable aquaculture production. We also look forward to working on implementing the recently released ASC global standards for sustainable salmon production,” Dr Llewellyn said.