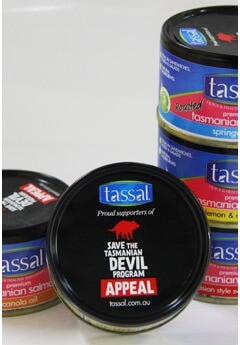 Tuesday, 27 September 2011
Iconic Tasmanian salmon producer Tassal is joining the campaign to save another Tasmanian icon – the Tasmanian Devil.

Tassal is donating $10,000 to the ‘Save the Tasmanian Devil Appeal’ and is turning its 95g canned salmon range black in support of the appeal from September 2011.

Tassal Managing Director and CEO, Mark Ryan, said the company was keen to play its part to help save the threatened animal.

“The Tasmanian Devil is a Tasmanian icon,” Mr Ryan said.

“As Australia’s largest salmon producer and being a national brand we have an opportunity to create national awareness of this uniquely Tasmanian issue by promoting this message in supermarkets across Australia” he said.

“Tassal has grown over 25 years into a thriving organisation with close ties to our Tasmanian community. This initiative to save the Tasmanian Devil is a great fit for our company and we are very pleased to do our bit to help the effort.”