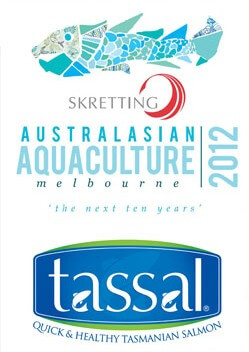 Thursday 3rd May 2012
Tasmanian salmon producer Tassal has won an inaugural Australian Aquaculture Award (The Blue Thumbs).
The award, in the aquaculture production category, was presented to Tassal during the Australasian Aquaculture conference in Melbourne on Wednesday night (2 May 2012).
The aquaculture awards, sponsored by the Global Aquaculture Alliance Best Aquaculture Practices certification program, recognised individuals and businesses that applied innovative and sustainable practices that would have lasting impacts on Australasian aquaculture over the next 10 years.
Tassal sustainability manager Linda Sams said she was very pleased, on behalf of the company, to win an inaugural “Blue Thumb” award.
“Tassal is Australia’s largest aquaculture company with harvest volume of more than 20,000 tonnes in 2010/11,” she said.
“As an organisation we invest considerable time and resources into our people, employing more than 700 statewide at hatcheries, processing facilities, retail outlets and marine farms.
“Importantly, sustainability is at the core of everything we do.
“We have a well-resourced environmental and sustainability team that works closely with regulatory bodies to ensure all activities are compliant and meet and exceed best practice environmental management and legal requirements.
“Tassal is focused on addressing environmental and social issues and participates in ongoing and meaningful communication with all stakeholders.”
Ms Sams said The Blue Thumb Award announcement on Wednesday night followed Tassal being recently named the Business Review Weekly 2010 Most Respected Leader in agriculture, forestry and fishing.
“The company was also named the 2011 Tasmanian Exporter of the Year and won the Tasports Agribusiness Award that recognised outstanding export achievements,” she said.
Ms Sams said from a broader industry perspective she was pleased to note that the judges were “encouraged by the quality of the applications”.
“The judges said they were impressed with all the entries highlighting that the aquaculture industry has many talented people and organisations,” she said.