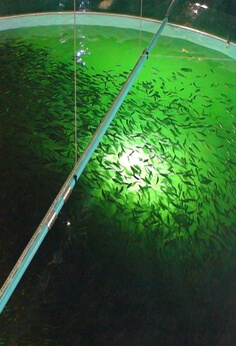 Tassal’s Ranelagh hatchery officially opened
With demand for water in Australia being predicted to increase by 1.5 trillion litres over the next 50 years, Tassal have wisely looked to the future in the design of their recently opened $25 million hatchery at Ranelagh. A cold and foggy July morning did not deter the considerable number of invited guests, including the Hon Lara Giddings and the Hon Julie Collins, as well as many of the contractors who worked on the large building from attending the Official Opening by the Premier, the Hon David Bartlett.
Claimed as the world’s largest salmon hatchery, it features a suite of best practice technologies, having been designed to ensure both the quality and quantity of smolt, being capable of producing 4 million salmon smolt annually.
Demonstrating Tassal’s commitment to sustainability through water conservation, the hatchery features a “state of the art” water recirculation system, identified after an extensive international tendering process. The system recirculates water though a series of fish tanks equivalent to 13 olympic size swimming pools within a totally enclosed and regulated temperature controlled building.

The recirculation system minimises water usage and ensures a high quality of wastewater treatment. More than 98 per cent of water is re-used. The small amount of water that is lost in the recirculation process is replaced from an underground bore at the hatchery not from the river. The amount of water drawn from the bore is between 80,000 and 160,000 litres a day representing 1 – 2% of water in the system.

The smolt hatchlings are initially kept in giant drawers where they are constantly monitored and kept clean. The system allows for minimal handling and the fish are kept stress free in the mechanised sorting process.

The tanks which can hold up to 100,000 smolts are completely controlled and monitored by sophisticated technology and the smolt can be produced according to market demand by manipulating their growing conditions. When they have reached the correct condition for growing out at sea, usually when their blood chloride levels reach an acceptably low level after a salt water challenge test,the smolt are transferred to their sea cages at one of the many Tassal sites.

The recirculation system filters out all the excess feed and faeces through a complicated series of settlement ponds inside the shed and the resultant sludge is recycled by Veolia to be used in their composting processes. Depending on biomass levels, between 0 to 7 cubic metres of waste sludge is produced daily.

The Huon region benefitted enormously from both the hatchery design and construction as the hatchery was a major project by any standard. Tassal hired a core construction team of 25 people. This was supplemented by 18 Tasmanian professional service firms, 61 Tasmanian supplier companies and 52 Tasmanian construction or contracting companies (many of them small to medium-sized local businesses).
Story by Mary Brewer from “Fishing Today” August 2010 edition.